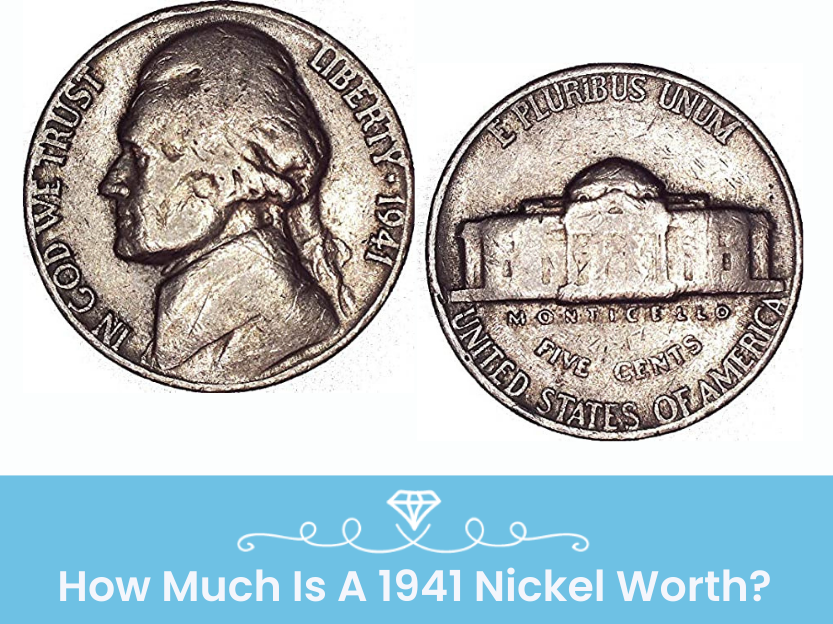 The US mint has used Jefferson nickels since 1938 for minting coins. It was used instead of Buffalo nickel as the latter was too demanding for minting because of its complicated design.

About 300,000,000 5 cents coins were minted in 1941, which made them abundant in the current coin market. This is why you can even find these pieces in the mint state today. However, 1941 nickel value is comparatively low as collectors often look for uncirculated coins.

This was the third coin that was minted, having the image of a former American President after Abraham Lincoln and George Washington.

These coins were minted after US Mint decided to replace the Buffalo nickel for its 5-cent coins. To mark the 200th anniversary of Thomas Jefferson, in 1943, the mint approached contestants to create a design with two conditions.

The first condition had to include Jefferson’s portrait, while the second was to include Monticello on its reverse.

The winner who won the prize money of $1,000 was Felix Schlag. But unfortunately, his design, although beautiful, had to be changed according to the officials. This is because they did not like the letter’s appearance in its inscriptions and the Monticello view from its angle.

The design was pretty simple, showing Jefferson’s profile on the left. On its left was a phrase IN GOD WE TRUST with an inscription of LIBERTY along with the minting date present behind the portrait.

On the reverse side, it showed the Monticello house followed by the word MONTICELLO beneath it. It also has the Latin phrase E PLURIBUS UNUM written on the upper coin rim. Finally, on the lower rim, we see the UNITED STATES OF AMERICA with the FIVE CENTS inscribed above it.

Types of the 1941 Jefferson Nickel Coins and their worth

The estimated value of These coins has been summarized based on their condition and composition.

The reason that these coins were minted in huge numbers makes their value very low. It is possible to buy this coin at as low as $0.06. However, if you have the MS67 grade coin, you can sell it at $81 or higher.

The year saw the minting of over 18,720 proof Nickel coins from Philadelphia. It is the reason why they are the most common ones available in the coin market today. Their price for the PR60 rating is about $18, while for the PR68 graded coin, the pricing is about $9,750. The below table gives an approx. Value of each quality of the Jefferson Nickel Coins.

These were the least minted coins from the mint in San Francisco. Only 43,445,000 coins were minted, but still, they are not highly valuable pieces. Their valuation ranges from $0.3 to $1.5 and depends on their quality and higher if they are among the uncirculated ones.

If a 1941 Jefferson Nickel coin has a D mark on it, it belongs to the coins minted from Denver. As many as 53,432,000 D Jefferson Nickel coins were minted in huge numbers, making them easily available in the coin market today. The table below summarizes the valuation of each coin based on its quality and markings.

As clear from the above summary, the value of Nickel isn’t high and the average price of a coin in a decent condition can be anywhere between $0.08 to $1.7. However, if it is an MS67-rated coin, the value is about $56.

Full Steps Jefferson Nickel coins come with 5-6 steps at the entrance of Monticello, shown on the coin’s reverse. Scarcely available, such individual pieces can reach high prices. The approximate value of them has been summarized below.

Some coins with a matrix outside its center have frequent errors. If you have one of these coins, the value of it could be anywhere between $8 to $100.

Some doubling nickels from 1941 are also available and none of these stand out with an error. This is the reason why their value is significantly increased.

Collectors often look for coins in their mint state, but it doesn’t mean that there isn’t any demand for the circulating pieces. Especially the ones with a higher rating and in excellent condition are in demand. However, one should trust a professional to value the coin based on its condition, as these coins date back several decades today. Therefore, the valuation of the coins from this category has been summarized below.

As mentioned before, collectors like to buy uncirculated coins as these pieces were not circulated, and one can see their original luster on the surface. These coins have Jefferson’s portrait visible and you can easily see the eyebrows and the hair in the perfect inscription.

These coins are the ones that were in circulation for a limited period. So you may see minimal signs of wear over these coins. For example, it has minor flattering of protruding details of Jefferson’s portrait, like his eyebrows and hair. But the hair strands or the coat contours are distinctly visible.

These coins were in circulation for a considerable period. As a result, they have significant signs of wear over them. But if you look closely, the main elements, such as the contours of Jefferson’s coat and face, are visible. Additionally, you will notice that their hair and eyebrow of Jefferson have merged.

On the other hand, you will see that the former President’s hair and eyebrows details are almost merged. The chart below gives you an idea about the approximate value of each coin based on its quality and condition.

These are low-grade coins that were in circulation for a considerably more extended period. Such coins will have several scratches, and damage will be visible on the surface. The relief details of these coins will be worn out.

The coin will have larger surfaces with the main design elements having contours but its legible inscriptions and date on it.

Determining the value of a 1941 Jefferson Nickel Coin requires defining the type of coin you have. The year saw three mints minting the coin, and mint marks impacted the market value of those coins.

The condition of any coin is a critical factor that determines its value. But having said that, the coins in the mint state do not have a significantly high value.