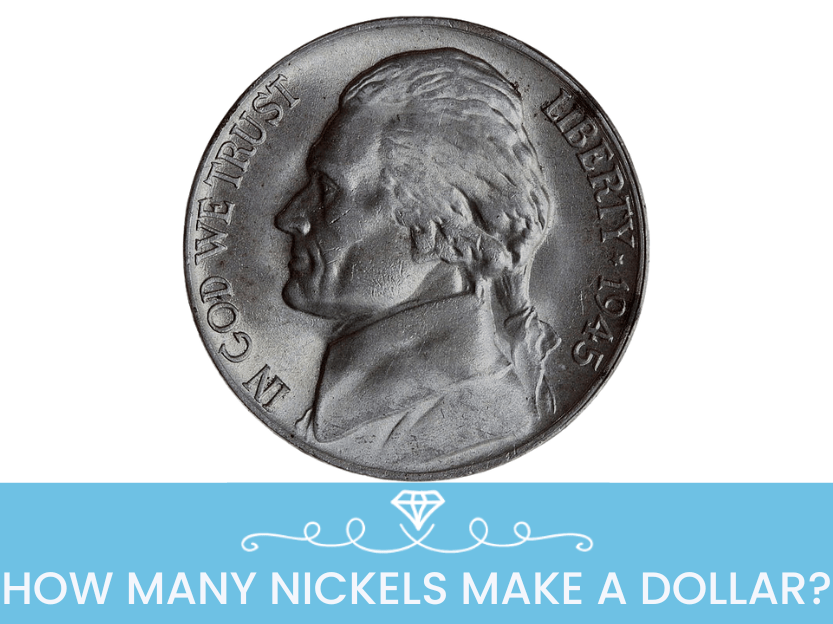 Money is valuable, whether it is a cent or a dollar. Take away one cent from a million dollars, and it will not remain one million dollars. So, every penny has value, and so do nickels. Nickel, penny, dime, and quarter are four unique currency coins in circulation though most Americans are not comfortable using these.

Each of these coins has its worth and traits. Today, we focus on nickels and try to learn more about these coins. We also discuss how many nickels make a dollar and its value compared to other currency coins.

How Many Nickels Make a Dollar?

Simply answering the question, 20 nickels make one dollar. But how do we get this number? We all know that 100 cents make a dollar. So dividing this number by the number of cents in one nickel gives us the answer.

More precisely, there are 100 cents in a dollar and 5 cents in one nickel. We thus divide 100 with 5 to get 20. So 20 nickels make a dollar and 40 nickels would make 2 dollars and so on. If you have some of these coins, you know their worth.

Is Nickel More Valuable Than Other Coins?

A nickel coin differs from other coins like quarter, penny, and dime in two ways; one is its value, and the second is its size. A nickel is worth five cents, a penny is one cent, a dime is ten, and a quarter twenty-five cents. Thus, a quarter has the highest value among the four. Five nickels make a quarter; a nickel is more valuable than a penny.

A quarter has a value of 0.25 dollars. Therefore, it is a quarter of a dollar.

Is Nickel Bigger Than Other Coins?

Talking about the size, nickel is bigger than penny and dime but not quarter because the quarter coin is the biggest of all. Nickel is, however, the thickest among the four currency coins and dime is the thinnest. These coins also have different edges; penny and nickel have smooth edges; they are also smooth and round all over.

Quarter and dime are pretty different in structure. They have ridged edges and this has remained so ever since their existence. The quarter coin has the face of the first US president George Washington on the head side, but the tail’s design has changed many times after 1998.

What design does a Nickel Coin Have?

A nickel coin generally bears a carving of a prominent figure in U.S. history on the front while the tail side has other historical designs. In addition, the coin’s reverse side sometimes features a landmark structure or anything defining the rich U.S. history.

The edges of a nickel coin are smooth and the front and tail designs are attractive and exciting as well. On the front of the nickel coin, you can see a portrait of Thomas Jefferson, the third president of the country who drafted the Declaration of Independence.

On the rear side, the nickel coin features ‘Monticello’, a landmark building belonging to Thomas Jefferson. It was the president’s home that he had designed himself. Jefferson has been on the coin design since 1938; the first ever change was made to the nickel coin’s obverse sign in 2005.

What Nickel Coins are Made Of?

It is easy to believe that a nickel coin is made using pure nickel, but it is not so. The coin contains nickel and the name comes from one of its metal constituents. Surprisingly, nickel only makes up 25% of the metal in the coin. The remaining part of the nickel coin is comprised of copper metal.

So, nickel has two constituent metals – 25% nickel and 75% copper. Between 1942 and 1945, nickel coins contained 35% silver. This decision of using silver instead of nickel was taken due to the high demand for nickel during the World War. Thus, the 5-cent coins were made with silver at the time of war.

Here are some reasons why the combination of nickel and copper is a wise choice for the coin.

A combination of nickel and copper does not corrode. The five-cent coin retains its shine for an extended period of time, allowing people to store coins for decades.

Everybody knows about copper’s antibacterial properties; the composition of nickel coin makes its surface resistant to harmful bacteria, viruses, and fungi.

An impressive thing about this coin is that it is completely recyclable. It is also possible to mint these coins from recycled metals.

There is a minimum risk of allergic reactions upon touching a copper-nickel coin.

The durability of this alloy has made it a preferred choice for many coin denominations across currencies. Unlike other metals and their combinations, coins made out of a mix of nickel and copper can last for decades.

A Look at the History of the U.S. Currency System

When we are talking about the relation between nickel and dollar, it is worth looking at the history of the country’s currency system. The first ever dollar was introduced in 1792 with a ‘dollar’ scroll and an eagle as the design. The versions of the coin released later featured ‘Lady Liberty on one side and the words’ United States of America’ on the other.

The coin values have been changing with time, and so have the designs. Till the 19th century, individual states used to issue their own coins as compared to today’s uniform federal-level currency system. Nickel coins are now made using an alloy of copper and nickel and have a value of five cents each. The coin has had many designs over the years.

We have explained in detail how many nickels equal a dollar. Nickel is referred to as a five-cent coin and is made up of a combination of nickel and copper. The coin is durable and can last for decades without losing its shine. We hope this article helps you understand the value and worth of nickel and adds to your knowledge about the U.S. currency system.